There is a lack of support for young people leaving care – but from privatisation of services to inadequate housing, the care system fails children long before the age of 18

One on four care leavers are homeless at 18, with 14% sleeping rough. Photograph: Victoria Jones/PA

If one in four young adults found themselves homeless once they turned 18, with 14% sleeping rough, we’d be asking where the hell their families were. But these figures are the reality for young care-leavers. After they cease to be the official responsibility of their local authority on their 18th birthday, the risks they face as a result of having nowhere to call home include ill health, violence, sexual exploitation and early death.

These are children who have been removed from their families precisely because they have suffered significant harm or are deemed to be at risk. So why do care-leavers so often end up without support, on the streets, camping out on friends’ floors and living insecure lives in unsuitable – and sometimes dangerous – accommodation? “It seems unbelievable that you could take the most vulnerable kids and put them into independent living without a package of support,” says children’s commissioner Anne Longfield. It is hard to disagree. 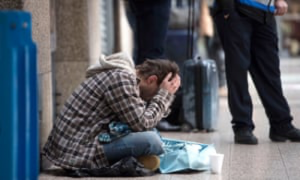 But problems start stacking up long before someone ceases to be “looked after” by their council. For example, because there aren’t enough foster carers across the country, local authorities end up unwillingly having to shunt children in care to “placements” hundreds of miles from home. It’s directly contrary to statutory guidance, but it happens a lot. As a result, those children lose their links with siblings, school friends and wider family members, and the fundamental relationship-based support structures all young people need to lean on as they move towards independence are weakened or destroyed.

This systemic failure in what is unattractively known as “corporate parenting” means vulnerable children become vulnerable adults. Meanwhile, some local authorities expect children to be capable of living without a close family structure around them while still extraordinarily young; they can be placed in supported housing from the age of 16 onwards. Inevitably this has resulted in scandal when it has been discovered that children are illegally living on their own in unregulated accommodation such as caravans or even tents. It’s not a big step from that to the street.

It’s true that caring for older children can be tricky for local authorities to navigate. Some teenagers may simply not want to live in a foster family or residential home – and 23% of children in care are now over 16. But councils create problems for themselves.

“The willingness of young people to engage with services is influenced by their experiences while they are in care,” says Stephen Walker, director of Leeds’ children’s services, which are rated “outstanding” by Ofsted. A child who has had several changes of social worker and multiple changes of placement probably doesn’t trust the council much, so, according to Walker, as they prepare to leave care “the last thing they want is to be involved with local authority services for any longer”. He says local authorities need to provide far better services from the moment distressed and traumatised children first arrive in their care.

Once a child in state care approaches the transition to independence, it might be thought that providing secure, affordable housing would be key – and it is. But getting a roof over your head is not the same as keeping it there. For that, many young care-leavers – like any other young adult who has just left home – will need emotional and practical support to manage their tenancy, pay the bills and hold down a job or training place.

Although some councils agree to edge care leavers up the housing list, this vulnerable group don’t have priority access to social housing

By definition, these young people often can’t call on their parents for help. It was therefore seen as a big win last year when councils’ duty of care towards care leavers was raised from the age of 21 to 25. But no extra funding was given by central government to meet the cost of providing an extra four years’ service. The quality of what is meant to be bespoke planning and support – remember, this is councils’ central offer to their care leavers – ranges from “good to indifferent to useless” says David Graham, director of the Care Leavers’ Association. It is, he says, frequently done by low-status, poorly qualified staff rather than better paid social workers who have more knowledge and more clout.

Although some councils agree to edge care leavers up the housing list, it is astonishing that this vulnerable group of young people don’t have priority access to social housing. Some councils exempt them from council tax, but not all, and at homelessness charity Centrepoint senior policy and research manager Abigail Gill says the government has been quite reticent in responding to calls for a waiver to be imposed nationally.

Incomprehensibly, housing allowance rules mean that the minute a care leaver turns 22, the slightly enhanced amount they receive drops, so they may suddenly find they can’t afford the rent. And so the spiral begins – arrears, eviction, homelessness, sometimes the street. “We have pushed government [to change] this, but they have not moved,” says Gill.

With record numbers being taken into care, the system is stretched to breaking point. There are not enough foster carers, not enough residential placements, not enough support workers, not enough housing – and not enough specialist types of all of the above to match children and young adults’ variety of needs. The privatisation of child protection now rampant across the care sector means local authorities are not commissioning what they need but can only pick from what the market opts to offer. “Private providers are in control,” says Graham. “It’s endemic in the care system.”

The Care Leavers’ Association is campaigning for a statutory right to housing for care leavers up to the age of 25, as well as an acceptance by housing providers that these young people should have the right to make a mistake without facing punitive action that can disrupt any gains they’ve managed to make. It’s hard not to conclude, however, that no matter what extra duties central government imposes on councils, if there’s no more money to meet them, whatever cash there is will be prioritised on at-risk toddlers rather than at-risk 18-year-olds. And so the direct line that links a child in the care system to a care leaver dying on the street will carry on unbroken.

« ‘We weren’t set up to deal with this’: how councils have responded to county lines